It seems like every time I get down or frustrated with challenges in my own life, my clients seem to send me on assignments that provide perspective. These assignments show me something special, introduce me to people who inspire me by how they meet much more difficult challenges.

Last year, that happened twice, with the same family.

Two boys, Miles and Caleb Lefebvre were both born with spina bifida. If you're not familiar, it's a disability caused by a spinal chord that didn't develop normally in the womb. Fortunately, both boys were born into a family that fights for their kiddos, tooth and nail. When the family was figuring out what sorts of equipment and services they needed, they also figured out what kind of support was available, to keep the kids happy and healthy and at home where they could be showered with the love of their family.

The problem is, that a part of that fight involved state agencies that were denying services that they were actually obligated to provide.

I met the Lefebvres one March morning to film the family in their morning routine and then to sit down with mom, Allison, for an interview that would be come a part for the Arizona Center for Law in the Public Interest's fundraising video.

While fighting for her children, Allison Lefebvre sought legal help from ACLPI to overcome the frequent roadblocks to compel the responsible government agency to fulfill its obligations, and to stop denying services.

Allison's compelling interview became part of a larger video explaining how ACLPI makes a difference in our community overall, while protecting specific clients such as the Lefebvres.


The video led to a return trip to the Lefebvre household to photograph a day in the life of the Lefbvres while working with the publisher of Raising Arizona Kids Magazine, Karen Barr, to create and extended article in the magazine (September 2019) telling the Lefebvre's story, exploring their challenges, and how this new normal is filled with the same sort of loving, supportive, fun atmosphere of many families, just with medical equipment and a full-time nurse.

As we worked together you could feel the love of the household in the air, in the interactions. It was an inspiring day. The boys laughed and squealed with delight as they had breakfast, played with toys in the yard and drew pictures.

As Miles cuddled with his mom, he started to have some breathing issues. One of Miles' devices told Allison that he needed some help. She began using an ambu bag to help the little boy breathe while the nurse set up an oxygen tank and connected it to his throat tube to resolve the issue. After a few minutes Miles was back to breathing normally. Later, Allison explained to me what had happened and that this is common event.

That would explain why she was so calm during the entire event and why I had almost no idea that something concerning was unfolding in front of my lens.

For a visitor it was startling.

For the family, it's normal.

Later that day Miles was sitting in the living room with his brothers, happily coloring and drawing pictures with crayons and markers. 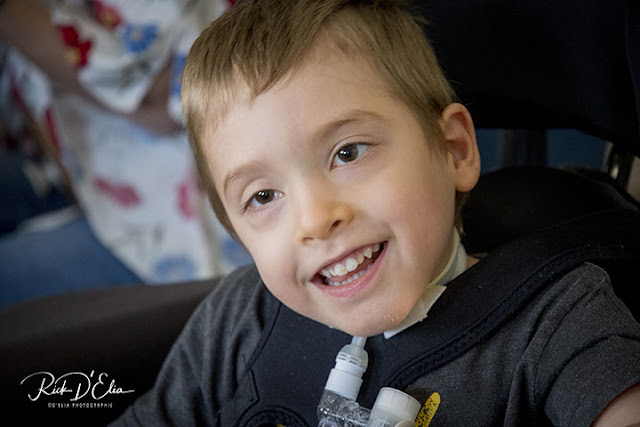